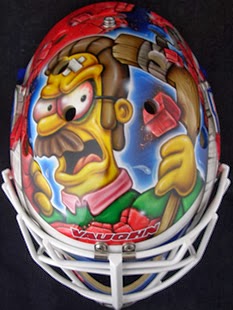 A while back, something unique on the mask of goaltender Peter Budaj caught my eye. It looks like a Simpsons character... Well I'll be damned... It's Ned Flanders! Browsed online for some pics to further research his intriguing mask, and realized that he's worn several different masks featuring Ned Flanders on the side or back. (Alternatively, while playing for the Colorado Avalance, Budaj also wore masks bearing the likeness of The Hulk, and Altaïr from Assassin's Creed.)

A trend has emerged during the past few decades of the National Hockey League, with cool graphics appearing on goalie masks. At one time, masks were usually painted with team logos and a few racing stripes... Which quickly evolved into scary masks to intimidate opponents... One of the most chilling masks has got to be the skull mask worn by Warren Skorodenski of the Chicago Blackhawks during the 1980s.

Today, the artwork has evolved immensely, some of the designs are so intricate that the artwork can only be truly appreciated in a freeze-frame or photograph. Goalies express their individuality through the art on their masks, which might also serve as a distraction to opposing players.

Even as a fairly avid hockey fan, I was surprised at the number of comic book and video game characters have appeared on the masks of NHL goaltenders... Which suggests that when they're not stopping pucks, it would appear as if some of these guys are just obsessed with comics and video games as the average male... 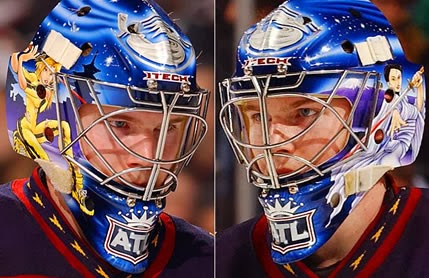 The artists behind Kari Lehtonen's mask definitely score extra points simply for the variety of characters that have been incorporated into his mask at one time or another... He's also had characters from Kill Bill and Final Fantasy X. 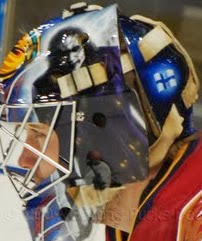 Kari Lehtonen has even worn a mask featuring the Joker, as played by Heath Ledger...

Lehtonen's Joker tribute can be a bit confusing, because Pasi Nurminen (another goaltender from the now-defunct Atlanta Thrashers) had previously worn a mask featuring comic book renditons of Batman & The Joker. 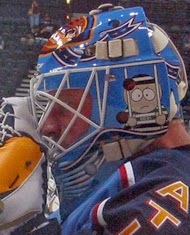 I've also found this pic of Nurminen with a South Park style character on his mask. Not sure if he ever wore it in a game, but it's interesting trivia. 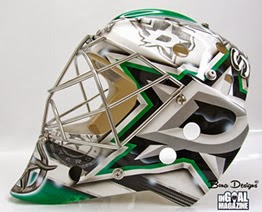 The characters seem to have disappeared from Kari Lehtonen's motif, and his mask was painted with the new Dallas Stars logo... (Which ironically resembles the logo of a now-defunct gaming website...) 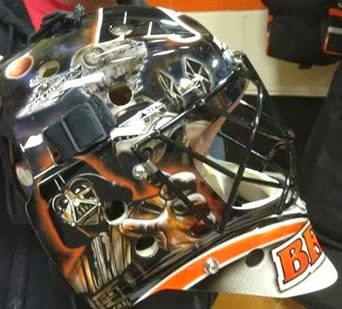 Ilya Bryzgalov's Star Wars mask, Yoda, with Darth Vader and R2D2. As a Star Wars fan, I personally think that this is one of the slickest masks that I've ever seen... 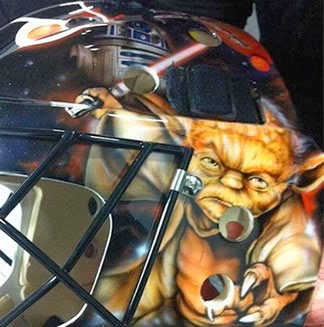 The mask originally featured Yoda yielding an Orange Lightsaber to match the colors of the Philadelphia Flyers... This led to an outrage from Star Wars fans who mistook it for a red lightsaber (used only be evil Sith Lords). 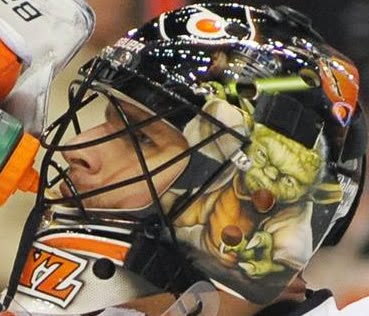 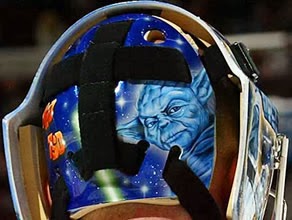 Another netminder has also been seen with Yoda lurking on the back of his mask... Wade Dubielewicz had Yoda depicted on the back plate of his helmet while playing for the New York Islanders. 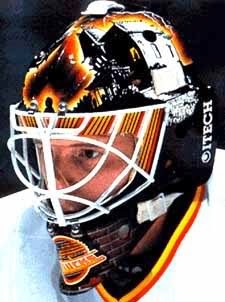 Corey Hirsch wanted a haunted house on his mask. His artist suggested the house from Albert Hitchcock's Psycho, and Hirsch couldn't have been more thrilled with the look of his Vancouver Canucks mask. 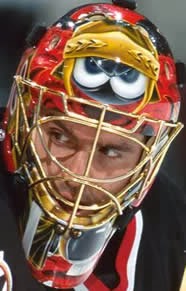 Marvin the Martian (who wears a Roman helmet, similar to the one on the Ottawa Senators logo), appeared on Patrick Lalime's helmet while playing for the Senators. Marvin the Martian seems to have followed Lalime to St. Louis and Buffalo, where the Martian has been spotted with blue plumes instead of red. 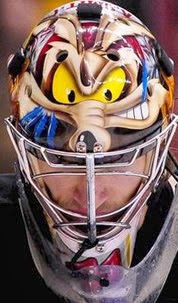 I can't even imagine how many hours I've watched the Coyote try and kill the freakin' Roadrunner... That's why I had to mention the cool Wile E. Coyote mask worn by Mike Smith while playing for the Phoenix Coyotes. Note the blue Roadrunner feathers in the Coyote's teeth! 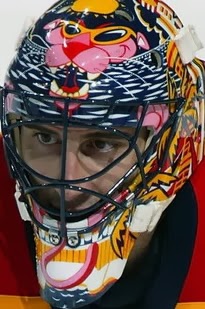 The day that Roberto Luongo was traded back to the Florida Panthers, sports newscasters dug up a bunch of old footage of him playing for the Panthers... I'd completely forgotten that he'd had the Pink Panther on his mask. Note the sunglasses for the Sunshine State. 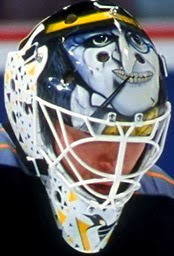 One of my childhood favorites... While playing for the Pittsburgh Penguins, Ken Wregget wore a mask featuring Danny DeVito as the evil villain "The Penguin" from Batman Returns. 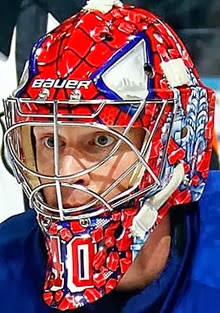 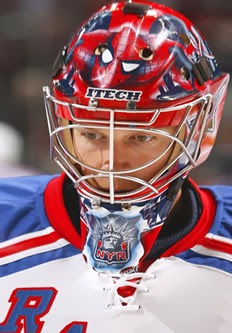 While in the crease for the New York Rangers, Steve Valliquet appropriately donned a Spider-Man mask. There are two variations that I know of, both cool in their own respect.
by DetErest @ 3:48 PM